Map of the Deadwater Wreck

This is a hand drawn paper map of the Wonnerup Deadwater showing research gathered by Thomas N O'Brien on the speculated wreck of a 17th century Dutch East Indies Company ship in the Deadwater.

"Centuries ago the Deadwater was an arm of a swiftly flowing river which ran through the coastal area known as the Vasse District. But sand gradually built up leaving the Deadwater very much as it is today, a mosquito infested lagoon of murky stagnant water. However, somewhere beneath the black mud and sand, lies the rotting timbers of an old wreck.

It was first discovered in 1834 when the original pioneer families settled in the area so it seems strange that none of the early explorers such as Baudin, Roe, Stirling and Bunbury, who had explored the area earlier, made any mention of it.

Many of the early settlers boarded it and fished from its deck, but unfortunately none of them were sufficiently interested to make a sketch of it or write down anything about its construction. The timbers were very rotten and it had settled deeply in the mud. Mr. George Layman was one of those who fished regularly from its deck when he was a boy. He said that when he and the boys jumped and played about on its deck it moved which seemed to indicate that it was not buried very deeply.

In 1845, Mr. Clifton the Official Receiver of Wrecks for the Colony, said that it was evidently an ancient wreck and judging from mast rings and a grappling iron found nearby it must have been a ship of some considerable size. Some years later the explorer F. T. Gregory came across the ship and judged it to have been "of considerable tonnage" and wrecked for more than 200 years. As the years went by the wreck sank deeper and deeper into the mud until only two or three feet were left visible.

In 1876 Mr. J. G. Bussell found two old coins near the wreck which might have given a clue as to the country of the ship's origin, but he refused to show them to anyone. Shortly afterwards about 70lbs of quicksilver or mercury was found nearby which suggests that whatever her nationality she must have been engaged in Eastern trade. Large quantities of mercury were used in the East and it was a commodity much sought after.

BY 1914 the wreck had disappeared completely, swallowed up by the Deadwater mud. Many stories of dark deeds, murder and piracy surround the wreck which makes it a fascinating mystery.

One such story dates back to the 1830's and concerns the massacre of the local Aborigines. They were wiped out by the early settlers who found thewreck. No record of this has been found and there seems to be no reason for it as the Aborigines were not a war like people. The story was told that they had many golden ornaments which they must have collected from the wreck and it was for these that they were killed. Others said it was because they knew too much about the wreck. Neither story can now be proved.

The wreck could be one of the 3 VOC ships still missing." 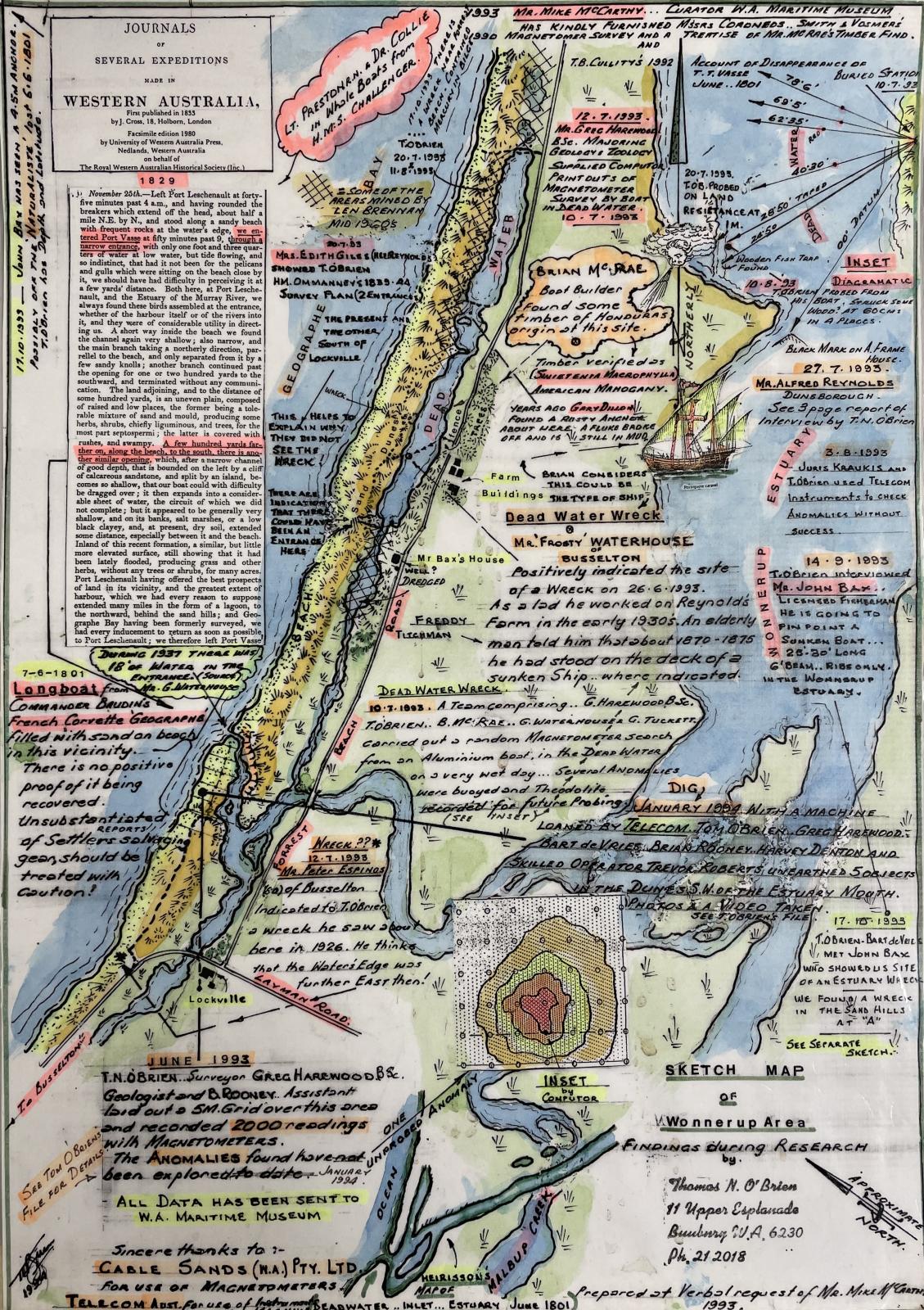