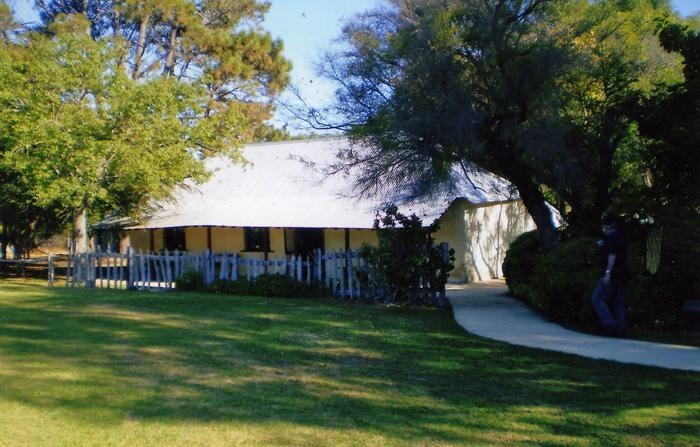 James Cockman and his wife Mary Ann (nee Roper) came to Western Australia to be part of the new Swan River Colony in 1829. James had been contracted as an indentured servant in England to the merchant, George Leake, and Mary Ann, who had travelled with her brother as a servant to the Waddell family. George Leake, like many of the colonists had sufficient means to pay for the voyage and assets including servants to secure the land grant he travelled to Western Australia to receive. However, the young James Cockman was not in a position to pay for such a voyage himself and so entered a ‘contract of indenture’ with Mr Leake to become an indentured servant.

Having accompanied Mr Leake to the new colony, young James set about not only assisting his employer but also establishing himself. He met Mary Ann Roper who had arrived in October 1829 aboard the Atwick, and married her in March 1830 in what is recorded as the first Anglican marriage and only the third marriage in the colony. It was the beginning of the Cockman family story as well. By November 1830, George Leake and James Cockman agreed to cancel his indenture. He then had to find his own work in the new colony. In 1831 James was granted the plot of land in Fremantle on which he built his first dwelling (appropriately this land is now part of Pioneer Reserve in Fremantle). By February 1832 his first son John was born. 1835 saw the family move to Perth and by 1839 he had built a new house, had three children, a cow and pigs making the family self-sufficient and well established in the colony. 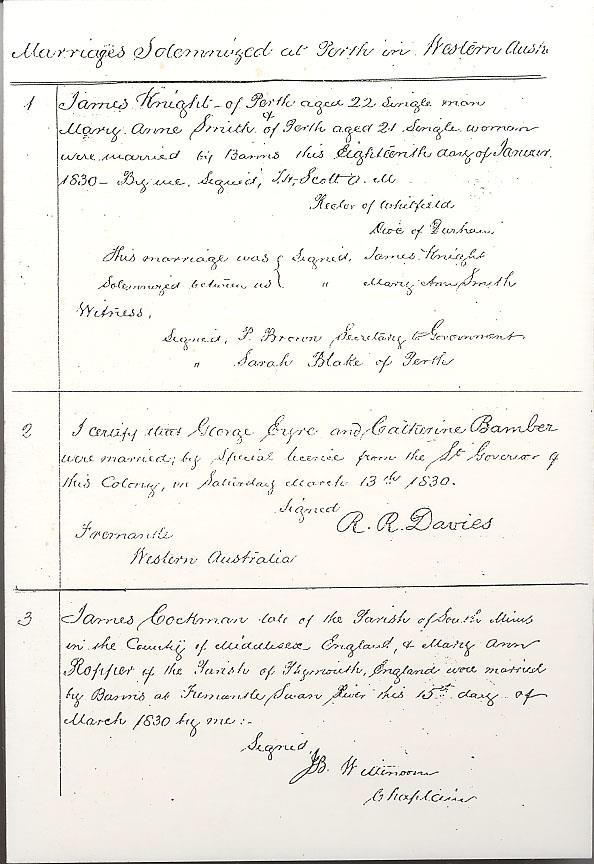 Making a Home in Wanneroo

The origins of the Cockman property begin in 1841 when James Cockman entered into an arrangement with George Shenton, a wealthy merchant and landowner who had taken up 640 acres of land north of Perth in what was then known as the Lakes District. They agreed that if James worked there for Shenton, he could build his own home on the property and later have the opportunity buy some of the surrounding land. However James’ wife Mary Ann was apprehensive about the isolation and complete lack of schooling and medical help in the area. Although James continued with his building work in Perth, he spent long periods camping on Shenton’s land, clearing and fencing as well as building a wattle and daub house with thatched roof for Mary Ann and the children. This house later became known as the ‘Little House’ and was completed in 1851. At this point Mary Ann agreed to move up from Perth. By 1853 James and Mary Ann had the required £100 to buy just over 45 acres from George Shenton to become landowners.

Having purchased his property, James and his family now worked to make it usable agricultural land. One of the main reasons that James Cockman decided to locate his home on the shore of Wallaburnup Swamp is because it is close to the lake system and its reliable source of water.  Here he established a market garden and dairy farm. Farm areas were cleared of much of the native vegetation to provide open grassed areas for cattle and closer to the lakes for the growing of vegetables. The reeds and other vegetation at the lake fringe were removed and vegetables planted into the mud.  The main vegetables grown were tomatoes, cabbage, cauliflower, potatoes, carrots and herbs. They also had an orchard, growing citrus fruits such as oranges and lemons, and other fruits such as plums, peaches, figs and olives. Once the farm was established the daily routine of farm work settled in. This included feeding and maintaining all the farm animals, planting, weeding, watering and harvesting the fruit and vegetables grown and later taking the produce to market in Perth. 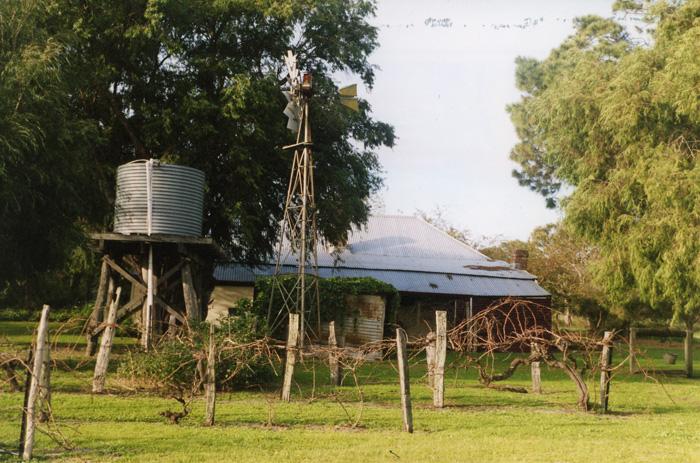 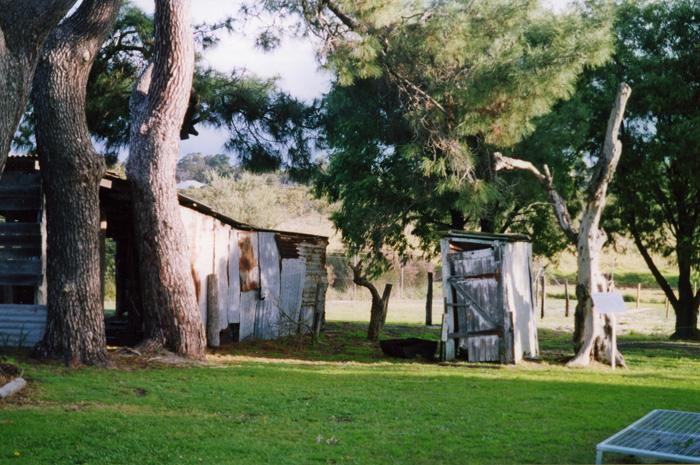 All this had to happen along with the building of the house. James, with the help of his son John, quarried the limestone for the walls as well as burning limestone to make lime mortar. The timber was cut from local jarrah trees, then cut into planks in the saw pit built for George Shenton near the house, using large two handed pit saws. The roof shingles were made from sheoak, split and cut into shape with a broad bladed axe. By the autumn of 1859, the thick walls of the new house with windows and doorframes in place was completed. Built in stages, the core of the house containing the lounge and main bedrooms was completed first. The lounge was to become the recreation and social hub of the house where the family could sit and enjoy the warmth of the fire once the chores were completed, or entertain the many visitors to the house.

Violet Backshall recalled that “on a winter’s night, a log fire was always burning in the lounge room, which we all sat around, enjoying the warmth and the togetherness.” After seven years on the property, the Cockman's at last had a house that was now very definitely a home and family space. The kitchen and children’s bedroom lean-to was added and later still a second lean-to was added forming the back room later used as a bathroom and verandah with another step down in floor level. 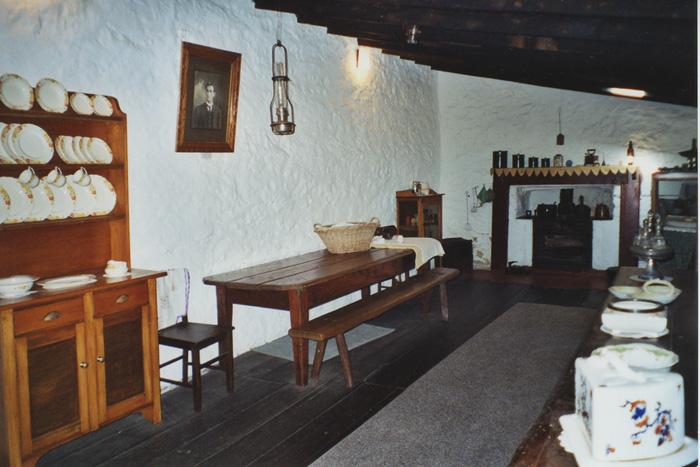 The structure of the families that lived at Cockman House was typical of most farming families at the time. The father was considered the head and authority of the family. His role was as provider for the family. He had to run the farm and make sure his family had sufficient food and water as well as basics such as shelter and clothes. In the 19th and well into the 20th century the extended family was common. This meant that families included grandparents in the same house as retirement villages and aged care services did not exist and families were expected to look after their older members as they aged.

In Cockman House, two long-lived women resided as the ‘Granny’ of the household: firstly Mary Ann Cockman (wife of James) and later by Emma Cockman (wife of James Samuel). Although the Grannies were not seen as the head of the household, they were certainly in a position of considerable influence. They provided additional ‘authority’ and ‘education’ for the children. They assisted where their age and physical abilities allowed in the many domestic chores that were part of the successful running of the house. Given the relatively small size of the house and the large families it accommodated, it was necessary for Granny to share her bed with the older girls to allow more room for the rest of the children in the beds in the children’s room. 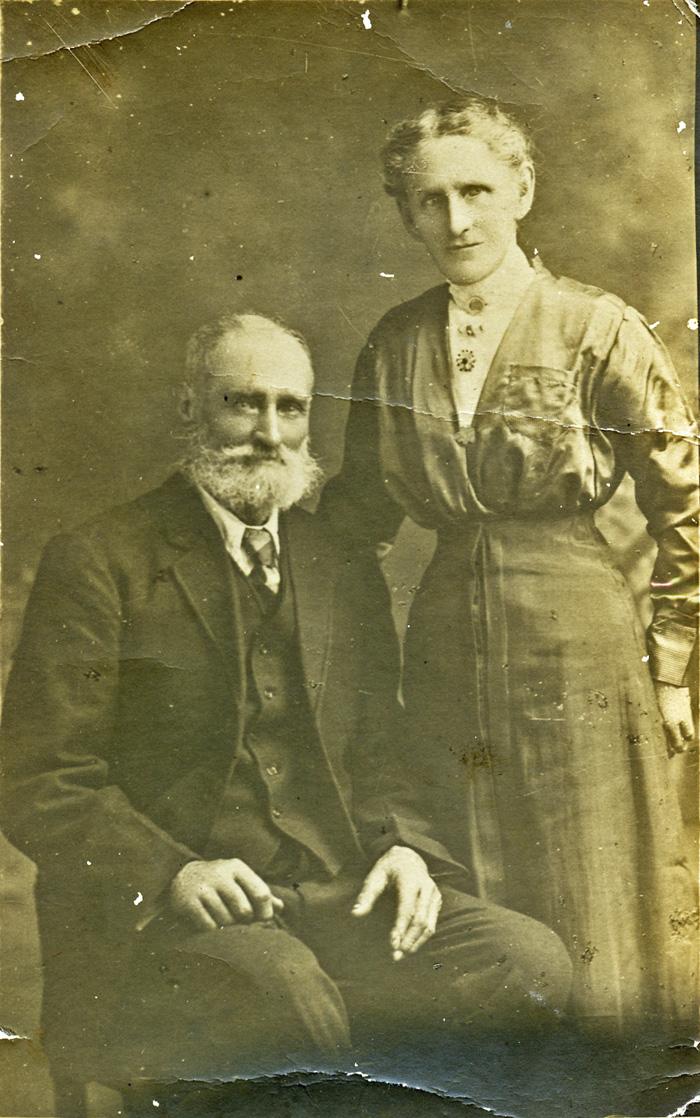 Children of the House

Large families were much more common in the past so children had to share most things including a bed at night. The second generation of Cockman House children had to sleep up to four to a bed because there were 13 children in the family. Each child in the bed alternated head or feet at the top end of the bed or slept ‘top and tail’ as the most comfortable arrangement.

In an interview with Cecil Cockman in 1977, he said:
"We needed a big house for 13 kids. Even so, we had just three bedrooms; my mother and father had one, the girls had one, they were the two bedrooms at the front of the house, and the boys had the bedroom at the back, which is off the kitchen. We slept two or three in one bed and three or four in the other; it was the same for the girls. The beds were big double beds with iron bars above and a canopy over the top to help keep out the winter cold". 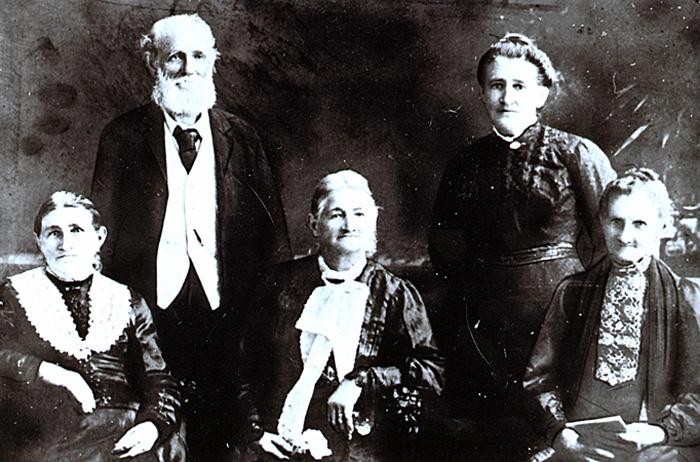 By 1876, all of James and Mary Ann's children were married, and with the exception of Samuel, had moved away from the house. Samuel and his wife Emma jane (nee Edwards) formerly of Gin Gin married in 1876 and continued to live in the house where they raised 13 children. James Cockman died in 1877 aged 69 years and Mary Ann died in 1901 aged 94 years. Ruby Backshall (nee Cockman), the youngest in this generation was to live in the house with her husband Albert Backshall and fanilly of six children, together with Ernest John Cockman who never married. Cockman House was occupied by descendants of James and Mary Ann until it was purchased by the City of Wanneroo in 1989 and restored as a 'Pioneers Home' museum for the public. 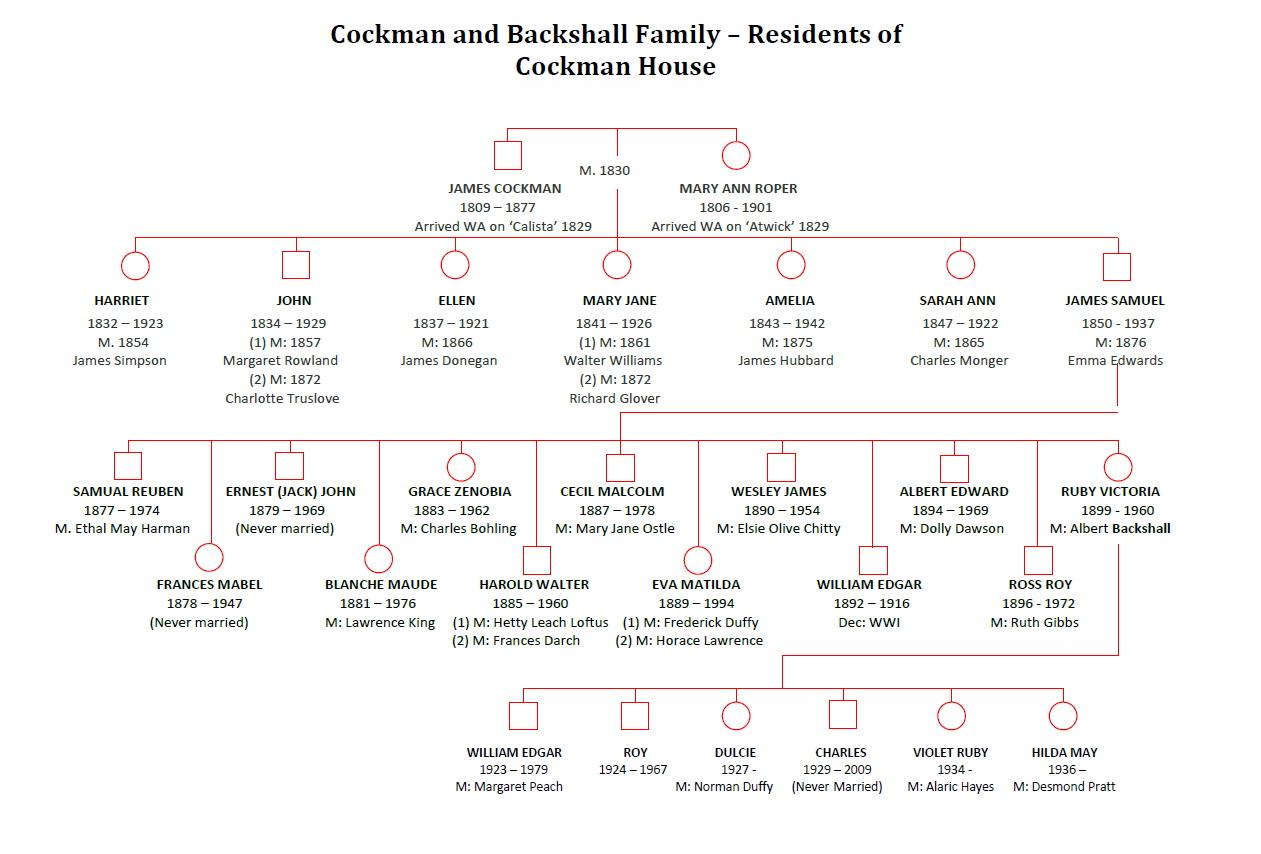